How does it work?

Nyitólap  |  How does it work?

One of the main ingredients of the Androgarde Capsule is L-Arginine. L-Arginine is an amino acid, long known for it’s positive effect on muscle strength.  Recent studies have shown that, in the human body, nitric oxide (NO) is produced from the Guanidine group that is found in Arginine. The more Arginins are present, the more NO is synthesized.

Nitric Oxide (NO) is an essentially important compound to the onset and maintenance of a healthy erectile mechanism, as it promotes the relaxation of the blood vessel walls, allowing them to expand. Consequently, in the absence of NO in cases of Arginine deficiency, the corpus cavernosum and penile arteries cannot sufficiently dilate to bring upon and maintain an erection, as opposed to when NO levels are sufficient.

The amount of Arginine produced by the human body decreases with age, a process that advances progressively. It is therefore important to initiate supplementing Arginine over the age of 40, knowing that L-Arginine naturally increases man’s potency. (1)

Studies by The Mayo Clinic, one of the leading research institute of the United States of America, has also demonstrated that Arginine alone is only sufficient in to sustain a healthy erection when taken in large doses. However, in combination with other agents, a lower dos may be effective.   (2)

One of these new discoveries is an extract of a particular pine bark, which, when combined with Arginine, greatly increases nitric oxide production in the body. (3,4)

In addition, L-Carnitine has proven to be effective in preventing erectile dysfunction. (5.) Carnitine’s fat burning effect has long been established. However, it is not widely known that, by inhibiting fat deposits in blood vessels via blocking lipid metabolism, L-Carnitine can effectively inhibit narrowing of small arteries, which is very important in maintaining a healthy erections.

Additionally, The Androgarde capsule contains the antioxidant coenzyme-Q10, which affects fat metabolism by inhibiting lipid peroxidation, thus reducing the risk of fat deposit in the capillaries. Furthermore, studies have also shown that co-Q10 also increases male fertility in some cases (6). Similarly to Arginine, the naturally occurring amount of co-Q10 in the body gradually decreases with age, so supplementing it is strongly suggested for men over the age of 40.

The fifth active ingredient of The Androgarde Capsule is Zinc (Zn). Zinc is a mineral that is present in all human cells, but its distribution is not uniform, and the amount of Zinc in the blood stream is influenced by the Zinc content of one’s diet. One of the well-known effects of Zinc is the potentiation of Testosterone synthesis (7), therefore sexual performance and reproductive ability is reduced in individuals with Zinc deficiency.

Last but not least, Vitamin D3 is one of the very important ingredients of The Androgarde Capsules. A recent study has shown that lack of Vitamin D3 alone can cause erectile dysfunction. When one is deficient in Vitamin D-3, excess levels of free radicals cause damage to the Corpus Cavernosum of the penis and the tunica intima (the inner wall) of the penile veins, thus decreasing the healthy erectile function (8) 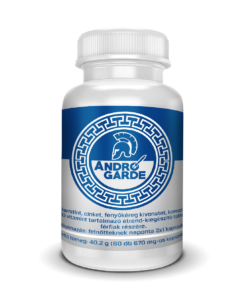